This article is from Neuroscience News, December 31, 2015.

Electronic toys for infants that produce lights, words and songs were associated with decreased quantity and quality of language compared to playing with books or traditional toys such as a wooden puzzle, a shape-sorter and a set of rubber blocks, according to an article published online by JAMA Pediatrics. 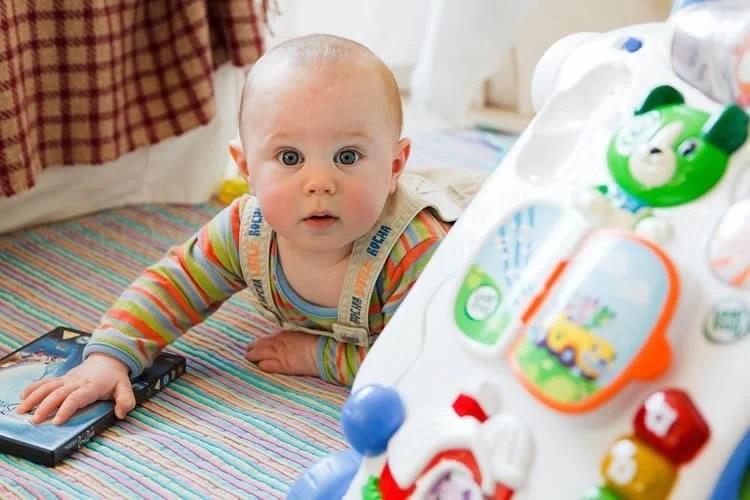 Anna V. Sosa, Ph.D., of Northern Arizona University, Flagstaff, and colleagues conducted a controlled experiment involving 26 parent-infant pairs with children who were 10 to 16 months old. Researchers did not directly observe parent-infant play time because it was conducted in participants’ homes. Audio recording equipment was used to pick up sound. Participants were given three sets of toys: electronic toys (a baby laptop, a talking farm and a baby cell phone); traditional toys (chunky wooden puzzle, shape-sorter and rubber blocks with pictures); and five board books with farm animal, shape or color themes.

The study has important limitations, including its small sample size and the similarity of the participants by race/ethnicity and socioeconomic status.

“These results provide a basis for discouraging the purchase of electronic toys that are promoted as educational and are often quite expensive. These results add to the large body of evidence supporting the potential benefits of book reading with very young children. They also expand on this by demonstrating that play with traditional toys may result in communicative interactions that are as rich as those that occur during book reading. … However, if the emphasis is on activities that promote a rich communicative interaction between parents and infants, both play with traditional toys and book reading can be promoted as language-facilitating activities while play with electronic toys should be discouraged,” the study concludes.

ABOUT THIS LANGUAGE AND NEURODEVELOPMENT RESEARCH

“Electronic toys that make noises or light up are extremely effective at commanding children’s attention by activating their orienting reflex. This primitive reflex compels the mind to focus on novel visual or auditory stimuli. The study by Sosa in this issue of JAMA Pediatrics suggests that they may do more than just command children’s attention; they appear to reduce parent-child verbal interactions. Why does this matter? Conversational turns during play do more than teach children language. They lay the groundwork for literacy skills, teach role-playing, give parents a window into their child’s developmental stage and struggles, and teach social skills such as turn-taking and accepting others’ leads. Verbal interactions of course are only part of the story. What is missing from this study is a sense of how nonverbal interactions, which are also an important source of social and emotional skills, varied by toy type,” write Jenny S. Radesky, M.D., of the University of Michigan Medical School, Ann Arbor, and Dimitri A. Christakis, M.D., M.P.H., of Seattle Children’s Hospital and a JAMA Pediatrics associate editor, in a related editorial.

“Any digital enhancement should serve a clear purpose to engage the child not only with the toy/app, but also transfer that engagement to others and the world around them to make what they learned meaningful and generalizable. Digital features have enormous potential to engage children in play – particularly children with a higher sensory threshold – but it is important the child not get stuck in the toy/app’s closed loop to the exclusion of real-world engagement. Bells and whistles may sell toys, but they also can detract value,” they conclude.

Funding: This study was funded by a research grant from the American Speech-Language-Hearing Foundation.

Source: JAMA Network
Image Source: The image is in the public domain
Original Research: Abstract for “Association of the Type of Toy Used During Play With the Quantity and Quality of Parent-Infant Communication” by Anna V. Sosa, PhD in JAMA Pediatrics. Published online December 23 2015 doi:10.1001/jamapediatrics.2015.3753

Objective To investigate whether the type of toy used during play is associated with the parent-infant communicative interaction.

Conclusions and Relevance Play with electronic toys is associated with decreased quantity and quality of language input compared with play with books or traditional toys. To promote early language development, play with electronic toys should be discouraged. Traditional toys may be a valuable alternative for parent-infant play time if book reading is not a preferred activity.

“Association of the Type of Toy Used During Play With the Quantity and Quality of Parent-Infant Communication” by Anna V. Sosa, PhD in JAMA Pediatrics. Published online December 23 2015 doi:10.1001/jamapediatrics.2015.3753

A Smarter Beginning 2013 All Rights Reserved